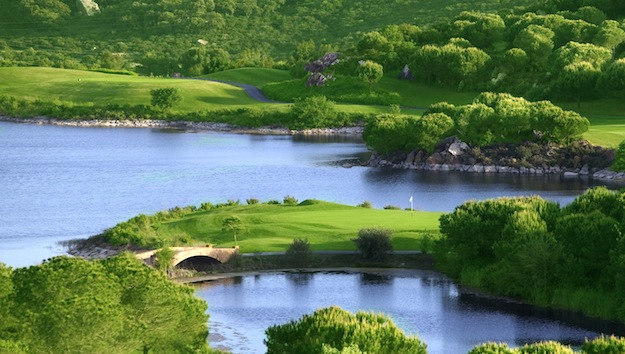 Course closed until October 2020, for maintenance

Lying in the upper part of the Golden Triangle of Sotogrande, 5 minutes from the beach and next door to the well known Valderrama and San Roque courses, you will find the 27 hole Dave Thomas designed Almenara Golf course, immaculately presented by Aymerich Golf Management. The course opened in 1999 with 18 holes and in 2001 opened an additional 9 holes and is a pay and play club only.

The first nine holes are known as Los Pinos y Los Alcornoques which wind through wooded areas of cork oak and wild pine. The 7th hole has been described in Golf Magazine as the most beautiful in the World.

The second 9 holes, known as Los Alcornoques y Los Lagos, starts high and cuts down to the impressive central lakes with a more open setting, and the third 9 holes, Los Lagos y Los Pinos rise up again towards the 18th green and Clubhouse which is part of the bungalow arrangement hotel with central reception, bar and restaurant.

This Tournament quality course runs over hilly terrain and the use of buggies is highly recommended.

The tight, narrow fairways, elevated tees and typical high lipped bunkers as well as the large natural water hazards offer a challenging game to all level of players.

Almenara is home to the Almenara School of Excellence and offers modern high tech facilities such as a covered floodlit driving range, ASTAR video swing analysis studio, separate approach and putting areas, 3 normal size practice holes and chipping and bunker practice areas. Eddie Polland, Mediterranean Golf’s Corporate Host is often found practicing here when he’s not away playing on a European Senior’s Tour event. With 5 other courses in the immediate vicinity, including Valderrama, host to the Ryder Cup, this is a must when visiting the Costa del Sol.