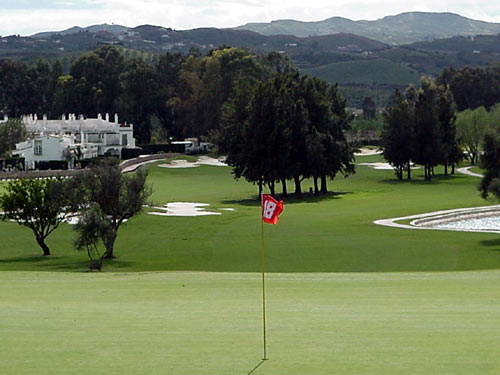 ust before you reach the village of Mijas, nestled in the hills above Fuengirola about 4km in from the Coast, along the Coin road you will find the Mijas International Golf Resort.

Mijas Golf opened its doors back in 1976 when it inaugurated the very popular Los Lagos course which was designed by the Robert Trent Jones Snr.  It was followed in 1984 by a second 18 hole  course , Los Olivos.

The fairways of the Los Olivos course are lined with an array of native trees (hence it’s name) such as tall pine, ancient olive and soft wispy willows. This gives the course a very natural parkland feel. course!

The design of the course, which is built on a smaller piece of  land than its twin and neighboring Los Lagos, incorporates both flat and undulating areas and doesn’t include much rough. The protection of the cleverly placed and numerous bunkers is challenging and requires a high level of technical ability and precision. The consistent ability to produce long straight shots is a distinct advantage on this course.

The old “cortijo” (farmhouse) style Club House building has a top class international restaurant, offering fine food all day and a cold beer after your game.